When looking for a town full of fascinating history, Easton, PA, is the place to go. One thing that goes hand-in-hand with history is ghosts. Our historic town features some of the most haunted places in Pennsylvania. Before you brave the ghosts’ territory, make sure you check out our complimentary Vacation Guide. It’s full of fantastic restaurants, things to do, and historic sites in Easton that won’t scare you!

Easton has played a prominent role in our nation’s history. It was one of the first places the Declaration of Independence was read and is celebrated every year during Easton Heritage Day. The town is abundant with buildings dating back hundreds of years, all with fascinating stories (and entities). Below, you’ll find the most notorious, haunted locations, bustling with paranormal activity.

1. State Theatre Center of the Arts

One of the most famous ghosts in Lehigh Valley lives at the State Theatre Center of the Arts. Here, you’re guaranteed to catch a show, but there’s a possibility you’ll also catch a shiver at the sight of the J. Fred Osterstock. He is the most famous Easton ghost, and he managed the company that owned the theatre until his death. He’s remembered every year with the FREDDY Awards for high school theater students. Locals are never surprised when visitors say they saw Freddy roaming around backstage!

Visit the haunted restaurant where the Blackhorse Inn once stood. This was a popular place for members of the mafia in the 1920s. Many people say they’ve seen a man named Johnny the Wop; he haunts the building after being gruesomely shot and murdered. Shortly after the restaurant opened, staff members began seeing shadowy figures and a black dog walking around in the basement. Pets have been known to get spooked in the building, and Animal Planet even did a feature on the haunted restaurant!

Easton Area Public Library is full of books and stories, but the best ones are the ghost stories. The building opened where an old cemetery was in 1903. The remains of more than 30 people had to be moved into an underground cement vault, which was eventually paved over into a parking lot. Library staff and other witnesses say books sometimes fly off the shelves, and doors and drawers open and slam on their own. Read at your own risk when you visit the library!

This rock on Hexenkopf Road was used during Native American rituals to get rid of evil spirits. Hexenkopf Rock, which translates from German to “witch’s head”, is known as a residence of demons and witches.

If you go on a ghost tour with Haunted Easton Tours, you’ll hear the story of a woman sentenced to stand on the rock for six hours, four times a year. She was accused of bewitching a horse, and now, some farmers believe their horses are drenched in sweat because the witches have put them to work.

The rock has a strange glow, but critics believe it’s from a coating of minerals. There is also an unusual amount of car accidents that happen near the rock but, who knows — maybe they’re just coincidences.

Getters Island is a little island that you can see from downtown Easton. This was the execution site of a man named Charles Getter. The dramatic story behind his death involves a woman accusing him of fathering her child. He was in love with another woman, but married the accuser and eventually strangled her to death. Some describe his execution as a carnival-type atmosphere. You can’t reach the island by foot, but you might see the ghost of Charles Getter from downtown if you dare to look at night!

Return to the Lafayette Inn for a Relaxing Evening 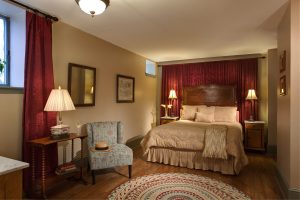 Come back to the Lafayette Inn for an excellent bed and breakfast experience after ghost hunting at the best haunted places in Pennsylvania. All of our luxury accommodations include a flat-screen television and phone charging stations, so you can get your mind off of those scary ghost stories before bed!

Stay in Room #3, our largest traditional room on the lower level. You’ll feel soothed and rejuvenated when you use the walk-in rain shower. Then, wake up in the morning to delicious Belgian waffles in the dining area! Check our availability and book your getaway today.